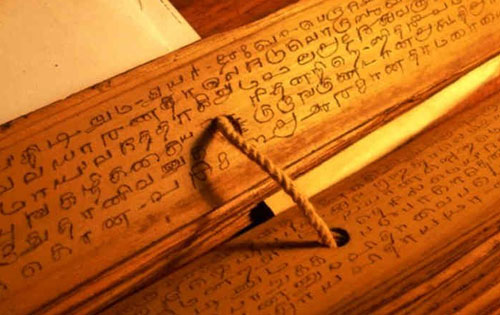 Nadi Astrology (Nadi jyothidam) is a type of Dharma astrology practiced in Tamil Nadu, Kerala and adjacent regions in India.


The history of ancient Nadi astrology originated in centuries of years ago; there were great Sages or Rishis, who had the vision of looking to know the future of anybody on earth. These foresights were written on Palm Leaves as Nadi josiyam in a particular script and these leaves are used to predict the people's future in these days by Nadi Astrologers.
The Rishis of ancient India Applied their minds and discovered many arts & sciences for the well-being of future generations of mankind. One of the science is Astrology. There are various branches in Astrology viz Horoscopy., i.e. casting & reading horoscopes based on the positions of planets at the time of birth of an individual and the movements of the planets across the Zodiac. This is a well developed science as proved from ancient texts like Brihatsamhita, Jathaka, Paarijatha and so on.

The Maharajah Serfoji II of Tanjore, who was a great patron of the arts & sciences, stored these leaves in his palace library so they would be available for the future. The British retrieved these leaves during their kingdom and later sold them to some Indian families, who still keep them. These families carefully maintain them and continue to train people in the proper reading the leaves so that people may still benefit from the ancient advice of these Siddhas as well known as Naadi Family. Now these Siddhas consider being Nadi family. The Nadi readers Mr.J.RAJASEKARAN works with this area around Vaitheeswaran koil and belong to one among the best nadi family.

Around the 12th century, these leaves were found lying in the location of South India ancient Vaitheeswaran Koil in Tamil Nadu. The Nayanar community which found these leaves realized their values &made exact copies of them and have been the custodians of the Nadi Leaves since then. They are also the only community which have been for generations trained to read the leaves, and interpret them to make the predictions. Also they are the only people who have access to the Nadi leaves and still following this one of traditional nadi astrology. Later astrologers who were very much interested in knowledge related to nadi astrology they got the leaves from the library. It seems that these palm leaves were originally written on animal skins &some leaves later texts were copied on palm leaves. These sources were also maintained by applying oil extracted from peacock's blood. The primary centre for Nadi astrology is located in Vaitheeswaran koil in South India.
A great value of the Nadi jyothidam gives you understanding the link from your prior birth to your present life. Another, even greater value of Nadi provides the exact ways to transform the residual karma of that prior birth. Your past really can come to haunt you. The Rishis not only wrote down your soul's roadmap on your Nadi leaf, but also prescribed a list of 'solutions' or 'course corrections' that will put you back on a favourable path. You really can rectify & correct past mistakes in judgment. So this is the history of authentic Indian astrology.